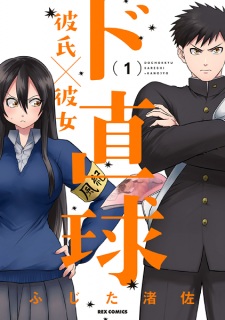 90% of all dialogue should be read as screaming.

With the recent announcement from fan translators that this manga is being picked up again for serialization starting in March, I took that as the excuse I needed to talk about this fun series. Do Chokkyuu Kareshi x Kanojo is a romantic comedy manga by Fujita Nagasa that centers around the high school life of Shinichi Honda and Mako Wakamiya. Both are loud and athletic teenagers who recently entered into their first year of high school and have started work in their clubs, with Honda joining the Kendo Club and Mako joining the Public Morals Committee. But beyond being loud and athletic the best way to describe these two is… as oblivious idiots. Now that’s not to say they are unintelligent, they are actually knowledgeable, but they are really REALLY stupid when faced with social situations.

I mean, at least he’s honest.

I hope the visual example gave you an idea of just the kind of guy Honda is, even though it doesn’t really do justice to how much of an unashamedly honest moron he is. But that’s his charm really, Honda is honest and hardworking to a fault with not a single bit of shame in his entire body. This is what Mako has in store for her romantic future so let’s pretend to pour one out for her. Then again, Mako is an easily-embarrassed and oblivious idiot who has a hard time keeping up with how open Honda really is and typically just crumbles under pressure. Honestly they’re made for each other.

Now unlike a lot of romance/romantic comedy manga this one actually doesn’t start off with one of the two already having a crush on the other, it actually starts off with Mako really not liking Honda. It isn’t until further into the story after a number of ridiculous situations that Mako starts to realize she even likes Honda at all and she can’t put two and two together even further on. Once she finally confronts Honda with this and tells him how she feels he responds with a very enthusiastic “Thanks!”

That was a brutal thing to read I have to admit. But honestly it’s the best part of the manga to me personally. I was reading this manga, saw the two doofy main characters and assumed it would go exactly as planned but no. Honda acts like a moron constantly, but he actually has a really level headed reasoning he gives Mako for why he can’t respond to her feelings in that they really know very little about one another. He isn’t just going to start dating her because of a one sided confession, he actually wants to date someone he likes back. So instead of the usual crush turning into a relationship like other manga, they instead decide to start hanging out together as friends.

After this the manga goes along a bit more as you’d expect, it still has to have a payoff after all. But the way there was a really enjoyable story to read, and Honda and Mako actually make a great pair that are more realistic and endearing despite how over the top and cartoonish the two are. I would highly recommend reading this series, especially now since it’s going to start being updated again soon. The comedy is up to par, and the romance bits feel nice to read and not as hokey as other stories I’ve read in this genre. Let me know in the comments below what you think of this manga, and be sure to check back again next week for another Manga Spotlight and have a great day.