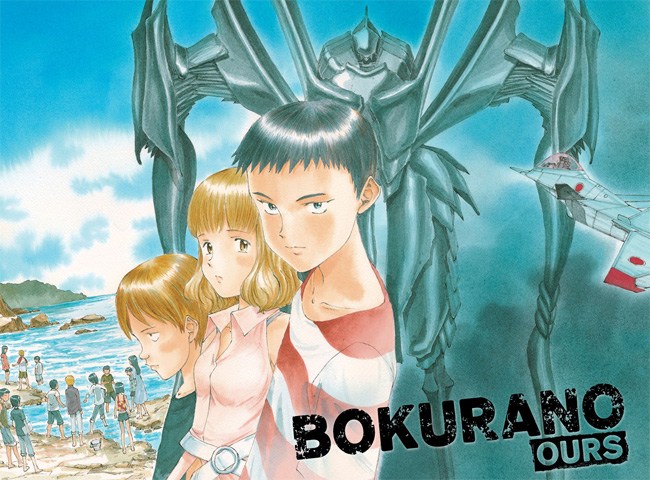 “The year we started junior high, we considered ourselves all grown up. We thought we could do anything. We laughed, we cried, we got angry… We thought we knew all there was to life.

But in reality, we were just kids, sheltered by our parents and by society. We’d never experienced true sadness, joy, or anger.

We found that out when the 15 of us got together… And when… We met IT.”

-First line spoken in the manga.

Life is not an easy thing for most people in this world, it is considered and can be seen as a complicated mess due to it`s hardships and how it can be expected to go depending on you birthplace.

Of course you might ask why am I ranting about life in a mech anime review and well, you see, Bokurano is like most mech series which is a character driven drama focusing on it`s protagonists experiences throughout the use of the mechs and basically the effects of it surrounding it.

However Bokurano instead takes a much more crueler take on the piloting of the mecha by kids.

I will give a basic summary.

On one fateful summer day a group of 15 kids find a cave where a mysterious man only known as Kokopelli who offers them a chance to beta test a videogame if they enter a contract, after the 15 have signed said contract they are transported inside a cockpit within a giant mech known as Zearth (The reason the title is Bokurano is because the robot is OURS “Bokurano is japanese for ours”) and they must fight a mysterious mech like creature so Zearth can keep the earth safe.

However that is all I can say without going into spoilers that make this series feel much more different than most modern mech series and while some can draw parallels to Madoka Magica (Two things, Bokurano was first published in 2003 and second is that the genre of Contract fucking over a group of users is a common story trope) however it also isn`t a deconstruction of the mech genre, instead it`s a series with a mech that talks about issues that children and people go through everyday.

Apathy, a lack of self-esteem, expectatives in life, lacking a sense of direction in life, all that goes with each of the characters they focus on.

The characters itself while kids who you cannot talk much about as there is no fixed protagonist (Each character gets a 3 chapter POV) that makes you understand their backstory and their personality.

The kids are selected at random per match and before each match they have reflections or questions about their own lives andd obviously the people they live with due to that.

The series is mostly a reflection series with talks about the human race besides the obvious why are we here but also about society and people itself,

The series can be considered depressing (Not a surprise since it is the same author as Narutaru which is my next review) due to the way it presents so much of it`s content.

And now to the music.

However they both fit the series as Uninstall talks about the anxiety of being a pilot and well.

The series has no dub so it is just subtitle only which is somewhat to be expected as it wasn`t that popular to justify one.

The anime and manga are two different stories in itself too due to the fact the anime director hated the manga storyline due to it`s depressing storytelling and characters.

I can say that Bokurano is an underviewed but memorable anime which is to be watched blindly because the series with spoilers is not as enjoyable as watching the series unravel itself,

To end it with a quote from the series

Link to the manga: https://www.viz.com/bokurano-ours

Link to the official release of the anime: https://www.discotekmedia.com/bokurano.htm