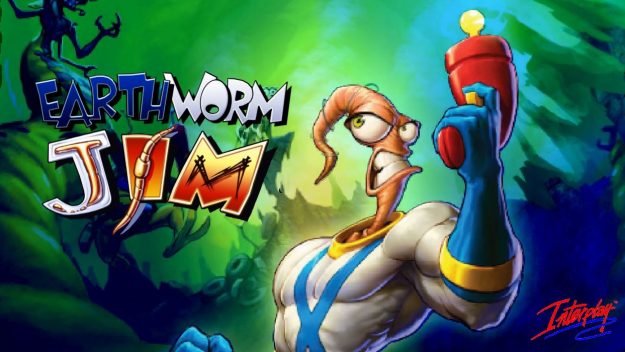 We are regret to inform you this morning that Earthworm Jim has recently been caught and arrested by the WPD (Woke Police Department) due to… being a product of it’s time. As CJ in GTA San Andreas says: “Ah shit, here we go again.” Multiple Kotaku and Polygon ‘journalists’ have called out an old Earthworm Jim game for it’s satirical humor. If there’s one thing that the left doesn’t like, it’s humor and satire that isn’t aimed at Trump. To start off with who’s offended, we go to Arthur Gies from Polygon, claiming that if the new Earthworm Jim was to be made by the original art team it would “rant about reverse racism, M*GA and make homophobic jokes.” In the original tweet, he decided to censor the A in MAGA because America is just that offensive, apparently.

The controversy started on May 1st when Tommy Tallarico announced the return of Earthworm Jim after 20 years. “HERE IT IS! THE BIG NEWS! OVER 20 YEARS IN THE MAKING!” he cries out on Twitter “EARTHWORM JIM IS BACK! WITH THE ENTIRE ORIGINAL TEAM!” he also stated it would be exclusive with the Intellivision Amico, the first 16-bit console to release in the 10s, announced back in 2018. Hoprealm, a random internet user, posted the tweet on the Waypoint forums, along with the comment of “Too bad Doug TenNaple is a homophobic, transphobic, very racist, bigotted person.” For all we know, this could entirely be spun out of Doug making a gay joke 5 years ago. I mean, if JonTron can get called a Nazi for displaying evidence and pissing off Destiny, this is to be expected. However, further digging displays Doug really as just a regular rightwinger. Things like how women are happier when they let feminism go and “let men be men”, not being a big fan of abortion. Those are the only pieces of proof of his ‘redpilled behavior’ that James Eldred on Mostly Retro decided to put forth before crying out “Okay, now if you too are a bigot who hates gay people, or if you are a men’s rights activist who encourages people to ‘take the red pill’ then yo, go nuts. Support your fellow bigot. But if you’re not a homophobic, sexist bigot and you still want to back Doug TenNapel, I have one question. What the fuck is wrong with you?” It’s clear that this one likes to rage more than put forth the evidence. If you too are a leftwing who likes to spew out their ignorance over dumb comments, then procede to go on a tirade on how bigoted and racist they are, what the fuck is wrong with you? At least provide something where they say the hard-r N-word, or punch a gay dude for no reason. Or a tweet proclaiming that Islam only destroys objects, something so generalizing and mean that it can actually be considered racist or homophobic.

Now lately there has been some other things that Earthworm Jim’s creator has been criticized for. The most notable is him ‘misgendering’ someone. Because assuming someone’s gender being a horrible crime against humanity further proves that the democratic party has not changed in the slightest since 2016. The journalist who was “misgendered” in question was Heather Alexandra, who literally looks like a man at any glance. And, since we’re not allowed to stare at women, we can only refer to said glance in memory otherwise we, too, will get arrested by the woke police. These tweets of ‘misgendering’ have since been deleted. It was said by redditor u/KurtTheWriter that TenNapel spoke out about the article, then was “deliberately referring to Alexandra by incorrect gender pronouns”. Again, these tweets have been taken down so we can’t know for sure if it’s an overexaduration or if he actually went out of his way to do so. Either way, the journalist in question clearly looked like a man, so this can just be an accident, then later deliberately did so when he noticed people got annoyed by it.

By now there is one thing that is clear about TenNapel, it’s that he doesn’t take bullshit, and he doesn’t hesitate to step on toes. Whether stepping on the toes in question is necessary or not, it’s clear that TenNapel is not an apologist. Lately in an interview with TenNapel on Niche Gamer, conducted by Brandon Orselli, TenNapel spoke more about the sparks of outrage:

“[Question:] Clearly, the event that prompted this interview is that flaccid Kotaku take on Earthworm Jim. Could you talk up the millennial critique of the game? It’s pretty baseless right?

[Answer:] This Kotaku article (source) is just the outrage of the day. They took an angle I disagree with, and I don’t mean that Earthworm Jim is beyond criticism. It’s full of flaws. But the author didn’t find any of them. I smelled an agenda from a mile away, and Kotaku should be thrilled with the traffic I got them! Yes, even Kotaku needs some TenNapel outrage to pay the bills. I only want their prosperity and want people to read Kotaku… I just want Heather to be a better writer. That’s encouragement to keep going and get better.” From his response, TenNapel was rather critiquing Heather, even encouraging her to do better, rather than raging. The article in question isn’t too harmful to the game besides calling it “mean spirited” and having “bad level design.” But it’s a game that is a critique of platformers, what else can you expect? In response to a question of whether the game was mean spirited, TenNapel also responded: “This is where it gets hard, because I don’t know what the reviewer meant by it at all. There is nothing mean spirited in it. I mean, sure we put lawyers in hell, but even my lawyer found that pretty funny.” It’s a clear understanding that the game is a satire and isn’t afraid to poke fun, much like TenNapel’s personality. TenNapel also answered the question of his support of GamerGate and having conservative views:

“I think it was a lot harder back in 2011 when I was doing this alone. I’d say something and the silent majority stayed silent. But since then, people have learned that being silent is how you lose an argument with a vocal, totalitarian left. I get the same amount of support as I get detractors so at least now there is a debate happening. It’s never good when one side silences the other. I’ve seen my side do it to the other guy and that doesn’t sit well with me. But social media is deceptive, because it seems to be what the whole world thinks. It’s not. It’s what the vocal minority on both sides think of something and they are a limited sample of the whole world of thought. We get this tiny feed and it looks like reality, even when I have 12,000 followers on Twitter. But it’s a skewed sample. So is Kotaku. So is Fox News, or the comments section of your favorite anything. It has far more psychological weight in the individual than it does in reality.”

This is something to really pinpoint. His like on Kotaku, Fox News and any comment section having skewed samples is what really hits home. While he has conservative views, dislikes the totalitarian leftwing groups and has always been on the right, he definitely knows when bullshit happens on his own side, and is not afraid to talk about it. At this point, it’s very clear that TenNapel is actually misunderstood rather than being this massive bigoted, homophobic prick. He has harsh words and harsh views, but he stands by them and isn’t afraid to step on someone’s foot. That’s what a real satirist does, and it’s a shame how people aren’t allowed to live like that in a world that deserves it now more than ever.

Also Earthworm Jim is my favorite childhood game that I appreciate now as an adult, and it’s fucking awesome. If you can, pick it up and play it yourself.